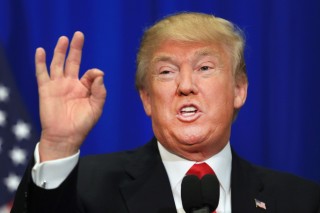 As a progressive liberal, I voted enthusiastically for Bernie Sanders in the Primary and ended up reluctantly voting for Hillary Clinton in the General election. But we got now President Donald Trump, not my choice at all for president. I have no choice but to accept the election results very unenthusiastically and apprehensively. But he is our president and there is nothing anyone can currently do about it. Our president has tried to make many appointments and changes to fulfill his campaign promises in his first 100 days in office and succeeded in some and failed in others. But I think our new president is very slowly starting to realize that things are not as simple as running his own company. People do not always jump at his commands and things such as foreign and economic policy are far more complex than he envisioned. His super ego is ever so slowly coming down from its lofty heights. So I see a very tiny glimmer of hope that he will not be a total disaster. That would be bad for all of us. The way I look at it now is that I am willing to give him a chance to learn his many roles and exercise his potential. He is not a conservative ideologue. He is a person who likes to wheel and deal. I believe that he is willing to compromise to get results since he really does not have many fundamental principles. That is why he is sometimes very difficult to predict. That may turn out to be a good thing. You simply cannot tell.

What I fear most is Vice President Mike Pence who is a conservative ideologue somehow becoming president. I know about his uncompromising conservative and religious values and has plenty of political experience and associations so will stumble much less as president than Donald Trump. I fear most that President Trump will be recalled for doing or tweeting something stupid and Pence will take over as president. As a matter of fact, I am convinced the Pence is just waiting for such an opportunity. He is capable of ramming through conservative legislation to change many of our hard fought civil liberty and anti-discrimination laws. This is my worst case scenario and political nightmare. I would rather be a pro-Trump advocate than seeing this happen.

Trump is a guy that looks for results more so than principles. That is why he was so easily convinced that this was not the time to repeal the Affordable Care Act. This also showed that Trump does not like dealing with details. He left it to Republican Congress to deal with health care and was largely hand off. He is currently quite handicapped with many of his key advisors without full or any staff to help advise him. It is obvious that he did not expect to win the election or he would have done more preparation before the election. I hope that Doland Trump will eventually be a decent president. I don’t think he will be great though it is so hard to predict what he will be. But I hope he will eventually be a competent president or we will all be in trouble. And most of all I hope he will not bungle things up so badly that he gets recalled and replaced by Vice President Pence.

So my sincere best wishes for President Trump to become competent at his complex job and may his ego come closer to earth. Our country and this world are facing many urgent complex and interrelated issues with globalized economic trade, global climate change, and global inequality and conflicts. But we have local issues as well such as unemployment in middle America, healthcare problems, and social, racial, religious, economic, and sexual inequalities and discrimination to deal with. And we have a tax system that makes the very rich even very richer and everyone else very poorer. So this nation and world have many complex issues for our new president to deal with equitably. I wish him the best in doing what is best. But most of all I need him to stay in office for this term.